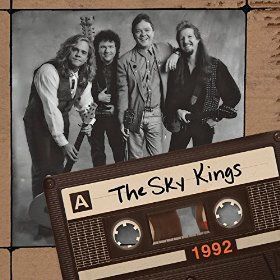 The Sky Kings were formed in 1991 and consisted of John Cowan (New Grass Revival), Bill Lloyd (Foster & Lloyd), Patrick Simmons (Doobie Brothers) and Rusty Young (Poco).  They were ID’d as being an American country music supergroup and were signed to a record deal with RCA Nashville by then Head of A&R, Josh Leo, and together Josh and I along with the band produced their debut album the following year. Then RCA, for reasons never fully explained, did not released their record and subsequently it has been bootlegged and passed around from person to person for years.

Now some 22+ years later Sony Music Entertainment has digitally released this first album, "1992" by The Sky Kings.  I encourage all my visitors here to check out and support this amazing group of musicians/songwriters and to purchase this long lost album we recorded together way back when.