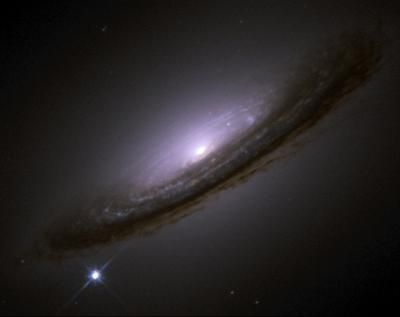 One late winters night Janet and I were driving back to our little farmhouse.  On the dirt road about a mile from our house was a nice big open field where we use to go watch thunderstorms roll-in during the summers.  But this was a rather cold night for anyone to be out in the elements.

As we topped a hill we noticed a car on the side of the road with its trunk flipped open and two young men standing there.  We thought maybe they had a flat or some other car trouble so me stop.  Turns out they were college students from SMS who were studying astronomy and they liked to use our little open field to do observations.  They invited us to join them but we were tired and wanted to get home to stoke up the fireplace before going to bed.  So we politely told them maybe some other time.

Before getting back into our car we mentioned that we only lived just down the road and that they were always welcome to come to our place where they wouldn’t have to deal with the lights from passing cars or the occasional local kids driving by throwing beer cans at them.

They took us up on our invitation a few nights later and through the rest of the winter and spring they would come rolling up our driveway once or twice a week at 10 or 11 o’clock to set-up their telescopes.  Janet and I would sometimes being them out some hot coffee or we’d invite them in to warm up on really cold clear nights.

Over the following months I got hook on those telescopes and having them show us places I never knew existed.  I also enjoyed observing the curiosity and excitement these two young astronomy students brought with them each and every night.

I sit here today and wonder whatever happen to those young men and if their passion to learn stayed with them.  I’m sure that images like this from Hubble would bring as big a smile to their faces as it does to mine.

I guess the main thing that photographs like these do for me today is to put who I am and what this life is all about into a proper perspective.  The scale of what exist beyond our daily lives here on Earth is at best incomprehensible, and for me borders on the mystical.