On The Way To Windermere

What do you have when you’re a songwriter in a band with two or more other songwriters?  If you were like me in the latter parts of the seventies, you’d have had too many songs just gathering dust.

I don’t remember the conversation per say or when the topic of doing a solo album first came up.  No doubt the discussion included my two managers, Stan Plesser and Paul Peterson, but I can’t say if the idea was mine, theirs or A&M Records.  But I do believe the idea came about towards the end of 1977 when things in OMD land were beginning to drift.

Randle had left a year or so earlier due to what I believe were his frustrations after “Car Over The Lake”.  Partly because his songs weren’t being taken seriously enough, but also Randle wanted to be touring more than the rest of us did.   What followed Randle’s departure were a couple of albums with declining record sales and a label that was starting to have second thoughts about the band.  Or to put it more precisely, about what the band had become.

Many years later while visiting with producer David Anderle at A&M in Los Angeles, a story was conveyed to me that reaffirmed my earlier view of how things had “drifted” by late 1977.

The story was that at some point after finishing “Don’t Look Down”, David and A&M Records co-owner Jerry Moss had driven up the coast from L.A. to see us play in Santa Barbara opening up for Steve Miller.  By this time the band had swollen in numbers to about eight members.  David told me that on the drive back to L.A. that night Jerry was not a happy camper.  For one thing, Jerry didn’t understand why we were still even considering being an “opening act” after all of the radio airplay we’d had and after A&M’s success in selling bucoo numbers of records over the preceding couple of years.

But his main disappointment was with what he had seen that night.  Jerry felt this was not the band he had signed to A&M.  In truth, it didn’t even vaguely resemble the band he remembered signing.  And it sure wasn’t the band he witnessed just a few years earlier.

In 1974 just after the release of “It’ll Shine When I Shines”, Jerry and David had flown over to Glasgow Scotland to see one of our concerts.  What they saw that night was probably one of the best shows we ever did.

We’d just begun our first headlining tour in Europe and we didn’t know what to expect.  But that night in Glasgow the audience was unbelievably enthusiastic.  They stood up for the whole show and I can’t even remember how many encores they called us back for.  Finally after we’d run out of songs to play, we ended up bring everyone traveling with us, the road crew, managers, wives and friends out on the stage with us to sing “Beauty In The River” for a second time.

Everyone was in such high spirits after the show, especially Jerry Moss.   And I believe that was the night when Jerry really got what the band was all about.   And so had Glasgow.

But just three short years later in Santa Barbra, Jerry’s reaction would be all together different.

So it would have been some time between “Don’t Look Down” and “Alive” that this opportunity for me to do a solo record materialized.  First came meetings with several prospective producers like Andrew Gold (Linda Ronstadt) and Peter Asher (James Taylor) and long distance conversations with John Paul Jones (Led Zeppelin).  But I finally chose Norbert Putnam (Dan Fogelberg) whom I’d become good friends with while recording the “Car Over The Lake Album” at his studio in Nashville.

Yet in hindsight Norbert may not have been the right choice because we were too alike.  We both envisioned the final record in the exact same way.  Once we began recording, whenever I wanted to try something he’d say, “Sounds good, go for it…” and every idea he had, I loved.  There was no yin yang, and we were almost always in total agreement on EVERYTHING.  The record soon became a run away train that lead to over the top production, joined hand in hand with an over the top lifestyle.

Back then recording budgets were pretty large, if not open-ended.  I think the Eagles were spending a million+ on “The Long Run”.  We didn’t spend anything close to that, but nonetheless we did manage to drop a pretty penny recording that record.  We worked in Nashville, Miami and finally London.  While in London both Norbert and I each rented apartments just off of Oxford Circus where Air Studios were located.  We flew Bill Jones over, who had written all the string arrangements and set him up in his own apartment too.   We celebrated New Years Eve at the Savoy Hotel with dinner, dancing and a fine Latour popped open right at midnight.   Norbert and his wife, along with Janet and I also spent an amazing weekend at Henley-on-Thames where one night while visiting the downstairs pub we were invited by George and Olivia Harrison to “drop by for drinks” up the road at Friar Park, which turned out to be; a bit of an out of body experience for me.

And the irony to all this is, after the hard work we put in to this record, along with the fun and travel we got to experience, the finished album would only end up sitting in a vault, never to see the light of day.  But a vault was right where it should have gone and I’m really ok with it staying there.  I think some of the songs were actually pretty good.  But the record itself was not so good.

Of all the many wonderful things I experienced while making that record, one of my very favorite memories is from an adventure that occurred towards the end of recording.  I’d gone to London to record strings and to mix the album, but while I was there A&M set up an album cover photo session for me with photographer Gered Mankowitz (Stones / Jimi Hendrix).

Gered and I sat down one afternoon at the A&M offices with art director Michael Ross to discuss several options for the cover.  We decided to do an outside location session and Gered recommended we go up to the Lakes District to shoot in and around a place called Windemere.   I’d never heard of it but trusted that Gered and Michael had a plan.

The three of us drove up to Windemere about a week later and check into this old hotel next to a lake.  After enjoying a nice evening meal coupled with a bottle or two of Claret, it was off to get some shuteye before a 4AM wake-up call.

Out of a deep sleep I was awoken by the ringing of a telephone on the nightstand next to my bed.

“Look outside!” the voice on the other end of the phone said.

I slowly crawl out of bed and make my way through the dark room and pulled apart the curtains.  Through the window everything looked shrouded in white and I’m thinking, this doesn’t appear to be right.  After rubbing my eyes I slowly started to focus in on why it was so white outside.  It’s because there was snow covering everything,,, lots of snow.

When I got back to the phone and I realized it had been Gered on the other end, it became clear to me that he was obviously very excited.

“We’ve got to get up and go out there right now!”  was all he said before hanging up.

Well we got out there alright.  We drove around and shot pictures from first light until maybe ten o’clock.  It wasn’t very late that morning when we stopped for our first “liquid warm-up” of the day.  By then the three of us were wet and cold, yet we were having way too much fun to stop.  It was either Gered or Michael who suggested a remedy for the cold, and it was call “Courvoisier”.  It worked its miracles many times as the day wore on. 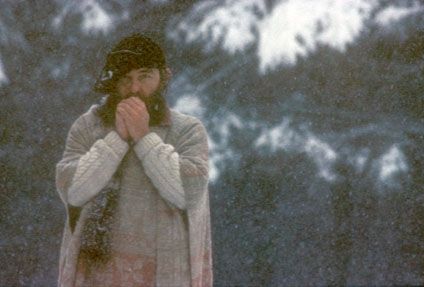 I’m definitely no “model” now and I for sure wasn’t one on this photo shoot.  In fact I’ve never enjoyed the idea of having my picture taken.  I’ve always felt uncomfortable with the whole process.  But Gered did manage to get several pictures that day which captured a few milliseconds in my life where I was neither here nor there.  Instances when a moment seems to linger just a little longer than normal, some almost to the point where you could feel the stoppage of time.  Gered caught me in those moments and it’s like I can almost feel that place again when I look at his pictures now. 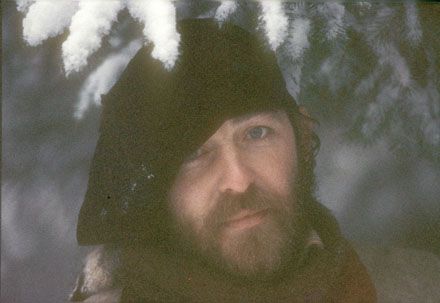 At one point we were driving along and Gered saw this big open field next to the road, which gently sloped down hill.  We pulled over and I immediately jumped out of the car.  Then for some reason I just climbed over this crumbling stone wall and started running, then tumbling over and over again all the way to the bottom of the hill.  Somehow within seconds I’d just gone from being a thirty one year old to about the age of five.  Admittedly it was a silly thing to do, but in my mind it just had to be done.  Covered in snow I climbed back up the hill, laughing so hard I was crying, or maybe I was just crying because I felt so alive.

Once I got myself back over the wall Gered just looked at me and said, “Never do anything like that again until I have a camera in my hands.”  We had a good laugh over the whole spectacle, followed by a few more swallows of the old “liquid warm-up” before heading out over the snow-covered roads in search of the next place to take more pictures.

I’d like to thank Gered for letting me share these pictures with you now and especially for giving me the experience of Windermere, that cold and snowy day so long ago. 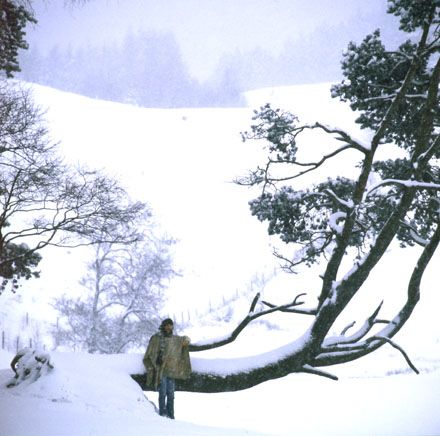 I recently found this picture from many years ago.  It was taken on our Windermere photo shoot and shows Michael Ross (A&M London's art director) writing in the snow with the obvious permission of the local constables.

The sign reads "Pissing Place.  You've got to love the British..... 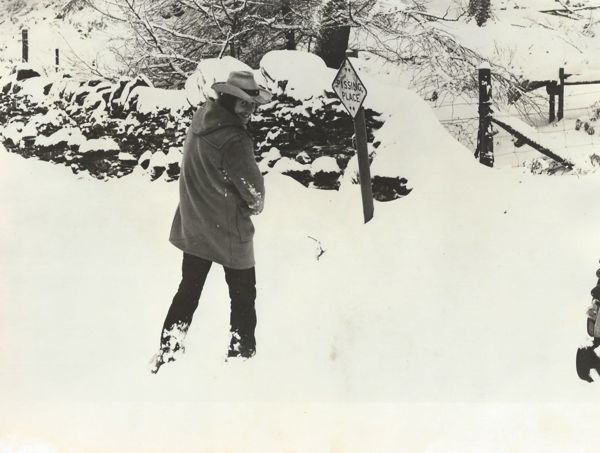